Trento: The door of the Dolomites

Halfway between Lake Garda, the largest in Italy, and the mountains of the Dolomites, the city of Trento is beyond the classic tourist circuits in the country. However, visitors to this small Alpine Capital are surprised to walk through the streets of story and discover the stories that keep the painted walls of their buildings. 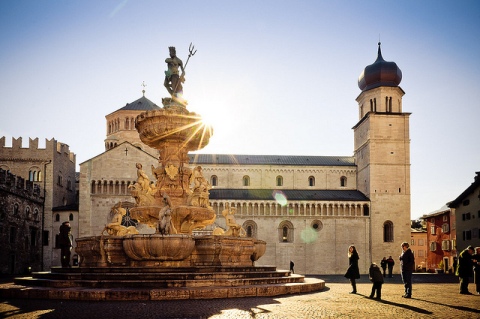 In the basement of the historic center of Trento lies the ancient Roman city of Tridentum, which was discovered during restoration work on the Social Theatre in the city. Although it is not clear the origin of its name, according to the popular legend this refers to the three hills which theoretically mark the limits of the city: Sant’Agata, San Rocco and Doss Trento or Verruca. The baroque statue representing Neptune with his Trident in the Piazza del Duomo is also refers to the ancient name of the city.

The Piazza del Duomo is precisely the most characteristic of Trent, and a good base for exploring the historic center of the city, whose cobbled streets and surrounded by mountains take visitors back in time. There is the San Vigilio Cathedral, which highlights the rosette of the Wheel of Fortune and other Romanesque buildings: The Praetorian Palace and Bishops Castle.

Across the square, the walls of the Cazuffi houses show the usual, typical of the Cinquecento Trentino, decorate with fresco paintings the facades of the main buildings of the city. In them, the appearance of mythological and pagan symbols mingles with everyday scenes and religious characters. The houses made corner with Via Belenzani, which continue to appear Renaissance palaces and walls painted with frescoes, including Palazzo Geremia, which now houses of the Town Hall. Nearby is the church of Santa Maria Maggiore, which developed many of the meetings of the famous Council of Trent.

Another symbol of the city is undoubtedly the Castello del Buonconsiglio, where the prince-bishops lived during the time of the Holy Roman-Germanic Empire. From its terrace on the loggia veneziana you can enjoy a great panoramic view of the city, with the Duomo towers and the Doss Trento hill between its most recognizable. The Torre Aquila is the Cycle of Months, a group of frescoes depicting the passage of the seasons. The series consisted of twelve paintings, one for each month, representing both trentina nobility life and typical agricultural activities of each era.

Trento is stopping place for lovers of mountain and winter sports. The city is guarded by Monte Bondone, a mass of over 2,000 meters. Although it is possible to walk out of the city and up the Bondone without taking any transportation, overcome the gap is considerable, and there are other alternatives for the feet less trained. A funicular ascends to Sardagna, about 500 meters, from where you can see good views of the city. There is also a bus service in about 45 minutes rises to the plateau of the Bondone Viote. There is the ski resort, a botanical garden, and is the starting point for various hiking trails. One of the most typical hikes is that of the three vertices of Bondone.

Tags:city of Trento
previousThe 10 airports with more flight delays
nextSleeping on top of a crane in Amsterdam