The Painted Hills in Oregon

The Painted Hills considered one of the main tourist attractions of Oregon, the State which lies on the Pacific coast, wedged between Southern California and the State of Washington to the North. Known as the Beaver State or like that of hurricane, from the French ouragan, more known as the Portland city. 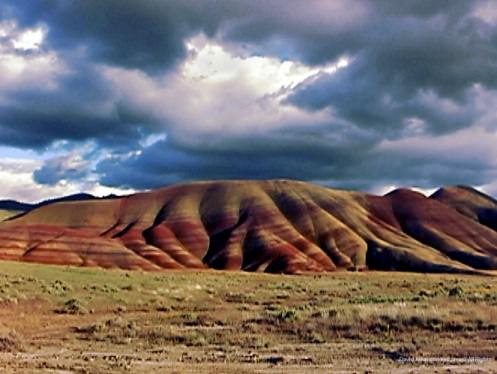 As is evident from the name of the Painted Hills comes from the different colored layers of hills, layers formed in different geological periods, during which the hills were formed when the area was an ancient floodplain.

Black is due to lignite, the plant material that grew along the flood plain, gray is mudstone, comprising siltstone and shale, while the red laterite soil that formed when the area was warm and humid. Here were found the fossil remains of early horses, camels, and rhinos.

The hills are located in the John Day Fossil Beds National Monument, about 9 miles from the town of Mitchell. You can get there only by having a car; no service, some area for picnics, trails for hikers and plenty of wildlife.