The Eiffel Tower in Paris

It is impossible for all the beauty of the city of Paris to tell, this article will therefore only be about the most famous monuments of this city: The Eiffel Tower. 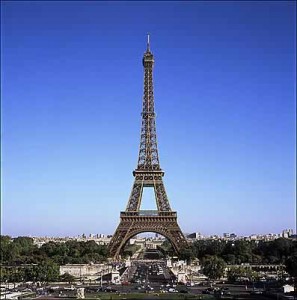 To the Eiffel Tower
We walked through the park that extends from one side to the tower. Once there you stand suddenly on a very big open courtyard under a huge steel structure. In the four corners are obliquely upwardly extending legs which lifts and stairways. The construction seems to be by the different thicknesses of the steel beams a great large weaving work. If you look up you see in the distance the first floor and you suddenly have huge admiration for the people who climb the stairs on the way there.

Construction of the Eiffel Tower
The Eiffel Tower was built for the World Exhibition in Paris, to celebrate the centenary of the French Revolution in 1789. The construction took 2 years to complete (1887-1889). With its 324 meters, this was the world’s tallest building until 1930. The height up to 15 cm. may vary, depending on the temperature.

It is equipped with 2.5 million rivets, 15,000 iron pieces, 40 tones of paint processed. Towards the top there are 1665 steps. Thanks to its special construction moves the top only up to 12 cm in high winds.

There are 3 floors accessible by elevator or by stairs and with a lovely view over the city. The bottom 2 floors are a restaurant, snack bar, a small cinema (where movies are shown on the Eiffel Tower) and various souvenir shops. On the top floor is the office of the builder Gustave Eiffel (1832-1923), a French engineer, who is also the iron skeleton for the Statue of Liberty in New York. Although originally intended for the tower to break down after the end of the exhibition, the tower still stands in the same place in the Centre of the city.

Restaurants on the Eiffel Tower

Altitude 95
Restaurant located on the first floor. The name is derived from the height at which it is located which is 95 meters above sea level. The large windows have a beautiful view over the Seine and the Trocadero to one side and a view of the inside of the Eiffel Tower on the other side. The restaurant has 200 seats and has an extensive menu.

Le Jules Verne
The prestigious Jules Verne Restaurant is located on the second floor and has its own private elevator access. This one finds at the southern pillar. The chief cook, Alain Reix, has ensured that the restaurant has a perfect record. It belongs to the best restaurants in France.