Oxford Street in London, the most polluted in the world

The air of Oxford Street, and the surrounding areas, London is the worst in the world for NO2 emissions, or nitrogen dioxide, at least according to what emerges from the results of a new survey conducted by King’s College London. 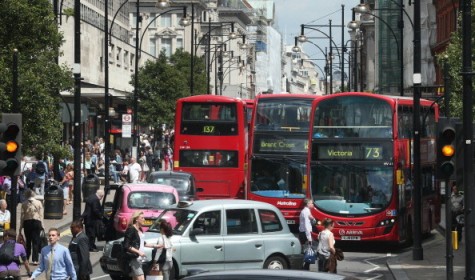 A multitude of taxis, buses, cars and commercial vehicles contribute to push the famous and crowded shopping area of the British capital at the top, unenviable, ranking of the world’s most polluted places.

Oxford Street is a very busy street in London, both by pedestrians from vehicular traffic; especially pedestrians are exposed to dangerously high levels of NO2. High levels of NO2 are known to aggravate respiratory illnesses such as asthma, but the nitrogen dioxin is also linked to heart attacks.

The spokesman for the researchers said that a gap in the current European standards on pollutant emissions, has led to a growth in the use of vehicles with diesel engine which, if it is true that emit particulate levels lower than the old engines, however, produce higher levels of NO2.

Concern in the association representing commercial operators of the area between Oxford Street, Regent Street and Bond Street, which drives the municipality because the London limit the traffic of vehicles in these areas.

Common that by itself has branded as misleading the results of this research, ensuring that the authorities constantly monitor the levels of city pollution, less than the largest cities in the world.

Tags:Oxford Street in London
previousParadise flower at the Gran Paradiso National Park
nextKyoto the best destination in the world for 2014