Where to go in Istanbul: Istiklal Caddesi

Istanbul has so much to offer, so much to do and so much to see, so it becomes difficult to choose, especially when you have a few days available. Despite all this, you should always “get by” at least half a day to walk along. 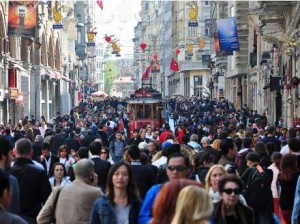 Istiklal Caddesi, probably the most famous street in Istanbul, maybe even only in the evening, since here the life never sleeps.

The history of this avenue, also known as Grande Rue de Pera when French was the language of diplomacy, is the history of Istanbul. At the time of Ottoman here met the intelligentsia of the city, attracting then the Europeans, so it is in a short time the Paris of the East, including embassies, churches and palaces. With the advent of the Republic, the Turkish bourgeois replaced the Europeans, who had left Istanbul, but the worst was yet to come, with the violence against the Greeks of 1955, and the street reduced to loose, place and receptacle of brothels, between the 1970 and 1980.

But after hitting the bottom, the avenue has undergone rebirth, with the restoration of the buildings, its pedestrianization, the restoration of the historic tram, and today is the busiest street in the city. In week-end, it is estimated that three million people, from all over Istanbul, and from all over the world, nor breadth its three kilometers, for shopping or to get something to eat.

In Istiklal street you can find everything from clothes shops to places to eat at any hour of the day and night, is located by the “salon” historical to eat typical dishes, to self-service to Burger King and Pizza Hut.

But not only shops and clubs to Istiklal Street, the avenue of embassies and spies, but also buildings ranging from Neoclassical to Art Nouveau, through the first Turkish domestic architecture, and then the Galata Tower, Taksim Square, Galatasaray Square, where the Galatasaray High School, the largest in the country, Cicek Pasaji, the Palace of the flowers, the second-oldest underground metro station in the world (it was in 1875), the fish market, synagogues, Orthodox and Catholic churches, like the Church of St. Anthony of Padua, the largest Catholic church in Istanbul. Well, hard not to go to Istiklal, when you are in Istanbul.