The strangest lakes in the world: Lake Manicouagan in Canada

To view it does not even seem strange; it is not pink, does the “bubbles”, it is not acid, does not fill with small transparent jellyfish, does not favor the fluorescence of beautiful tropical plants. In fact, to see it, not even one realizes that it is a lake. 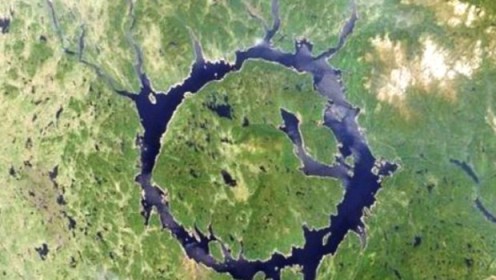 And it is precisely for this reason, because we realize the ground so easily of being in front of a Lake (rather than a river, one of the many Canadian rivers) that the Lake Manicouagan in Canada, has earned the right to be mentioned among the strangest lakes in the world.

It’s just above, or thanks to satellite photos from NASA, which we realize that it is a lake. More precisely, a ring-shaped lake formed in a crater created by the impact of a meteorite on Earth’s surface. In absolute terms, the 5th impact crater by extension the world.

At the center of the lake island, with a peak at 950 meters above sea level, 400 feet above the water level of the lake. And if you look at it with a google map, then you’ll understand why it’s called strangest lakes; the eye of Quebec.

Tags:Lake ManicouaganLake Manicouagan in Canadastrangest lakes in the world
previousCaribbean, the coolest places to spend the holidays
nextWestern Australia: Seven reasons to visit the West Coast