The Seegrotte, formed from an abandoned gypsum mine in the Austrian city of Hinterbruhl, consists of a series of underground channels that form the largest underground lake in Europe. 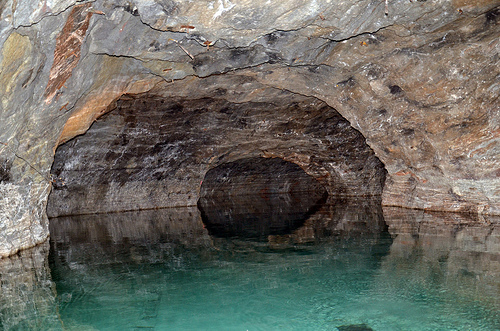 In 1912, an explosion in the Hinterbruhler gypsum mine, just 20 km from Vienna, it went wrong, causing the complete flooding of the mine, and the formation of a lake. At about 60 meters below ground level, the lake has an area of 6,200 square meters and every day must always be empty, because the water does not completely flood the caves.

During World War II, the caves were also heavily bombed by Allied aircraft, because the higher levels of the caves were used to build the airplanes of the German army.

During the war aside, the Seegrotte was opened as a tourist attraction since 1930, when visitors were offered to take boat trips on the lake surface; very special and certainly claustrophobic.

The Seegrotte in 2004 was the scene of a tragic accident, during which 5 tourists died, trapped under the boat that capsized. The investigation concluded that the accident was caused by the excessive number of passengers, and the poor design of the boat. Of course, after that incident, introduced new boat and was limited the number of passengers on board.

The lake, also used as the set for the last film in the series of The Three Musketeers Disney, attracts 250,000 visitors each year. 10 Euros for the interior, reduced €7 for children.