In today’s post we want to take you to Barcelona to mention to the must-see places that you will consider essential in any visit to Barcelona.

La Sagrada Familia
This building, located in the center of Barcelona (although somewhat away from other points of interest), has become one of the hallmarks of the city. 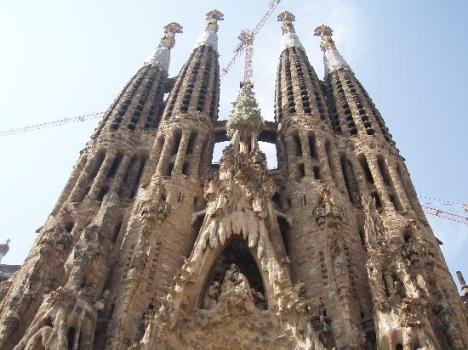 La Sagrada Familia is a church built by donations of the people, which was initiated in 1882 from a design by the architect Francisco de Paula del Villar, but soon (as of late 1883) went to Gaudi, which was in charge of the work until the day of his death in 1926. Unfinished since then, several architects have continued the construction work trying to follow the original idea of Gaudi.

Its 8 imposing towers lifted from the 18 which project Gaudi and Gloria impressive facades, the Nativity and the Passion, inviting the traveler to visit the inside from where you can climb some of the towers by elevator (one on each facade), to see a beautiful view of the city.

Guell Park
More than one century ago Eusebi Guell commissioned Gaudi to do an exclusive development for wealthy families in an area known as the Montana Pelada. Thus, in 1900 work began on the development of which, in 1914, were already raised most of the public areas and two stately homes (of the 60 originally planned, which was for the Guell and Gaudi himself); however such an exclusive character of the community that the project did not take off and finish the works were abandoned in 1914.

The park thus became a large private garden, which yielded Guell occasionally for public events. After the death of the promoter was purchased by the City Council in 1926 and opened as a city park. The house was fitted Guell family as a public school and home of Gaudi was turned into a house museum in memory of the architect.

The little success that the private sector had contrasted greatly with the acceptance that, as a public park, won the Guell Park, which was much appreciated by the locals and gradually became one of the attractions most visited by tourists. In fact, it was recognized as an artistic monument in 1969 and declared a World Heritage Site by UNESCO in 1984.

Wander around the Gothic Quarter and discover Barcelona Cathedral
On the remains of Old Roman Barcino, lies the medieval Barcelona with narrow, winding streets where centuries churches and Gothic palaces (which caused the disappearance of most of the Roman remains) were raised and which today is a pleasure to walk.

In fact, the Cathedral City stands there. Also known as the Santa Eulalia is a great example of Catalan Gothic architecture of the fourteenth century.

Passeig de Gracia
The Passeig de Gracia is one of the shopping streets of Barcelona par excellence, however, it not only gives but also it has some of the most important modernist buildings in the city, the two jewels made by Antonio Gaudi: Casa Batllo (one of the most representative works of Catalan modernist architecture that was built between 1904 and 1906) and La Pedrera (residence of a bourgeois family in the early twentieth century).

Tibidabo
The Tibidabo Mountain is the highest peak in the Sierra de Collserola and is also known as Magic Mountain, as one of the best viewpoints on the city to watch.

There is the amusement park is more ancient of Spain (opened in 1899), the spectacular Gothic temple of the Sacred Heart (whose top you can climb through elevator), the primitive Hermitage of 1886 (to the right of the Temple), the Collserola Tower, built on the occasion of the Olympic Games in 1992 and the Fabra Observatory, built in 1901, to carry out scientific research on meteorology, seismology and astronomy.

Montjuic
Used since ancient times as a military outpost, Montjuic is the mountain which protects Barcelona through its southern part.The work carried out for the Universal exhibition of 1929 and 1992 Olympics made that tourist places arise in Montjuic such as:

Palau de la Musica
The Palacio de la Musica Catalana, designed by Domenech i Montaner, is one of the more special concerts in the world and one of the most representative of the catalan modernism. Declared National Monument in 1971, is an impressive building that not only features a striking exterior endowed curious architectural elements but also has excellent acoustics.

Camp Nou
Opened in 1957, the stadium of FC Barcelona’s, Camp Nou stadium is the largest in Europe and one of the largest in the world. Beloved and hated both, it is clear that the local football team has a huge reputation worldwide and will not be a few who want to see the legendary stadium out or even make a tour to see first hand the changing rooms, tunnels and field of their football team; although we will not deny, the ideal would be to attend a party.