Nimbin, officially 352 inhabitants, is located near the east coast of Australia, about 180 kilometers south of Brisbane and 800 north of Sydney. It is located in the small department of Lismore, about 30 kilometers away from Nimbin, which has now acquired a certain notoriety, since there is born Julian Assange, the founder of WikiLeaks. 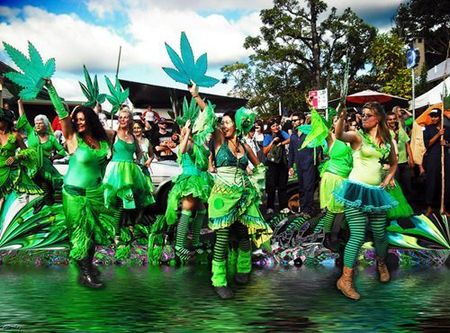 Here until 1960 have tried to develop, without much success, banana plantations, until in 1973 the university students, they decided to organize the ‘Aquarius Festival’, which was a great success, especially among the hippie community.

At the end of the festival, many of the participants decided to stay in Nimbin, and formed a community whose “glue” of the social was to search for an “alternative lifestyle”. Actual application, the common ownership of property, the first application of this legal form in Australia.

Since then Nimbin has attracted thousands of writers, artists, musicians, actors, environmentalists, and so many other “alternative” people, as well as tourists and young families fleeing the city.

Today Nimbin is known throughout Australia for its Mardi Gras, when the last day of Carnival, becomes a reason to “fight” for the liberalization of Cannabis in Australia.

Liberalization in Nimbin practice every day, because here, in spite of Australian laws prohibiting it, cultivate, sell and consume Cannabis.